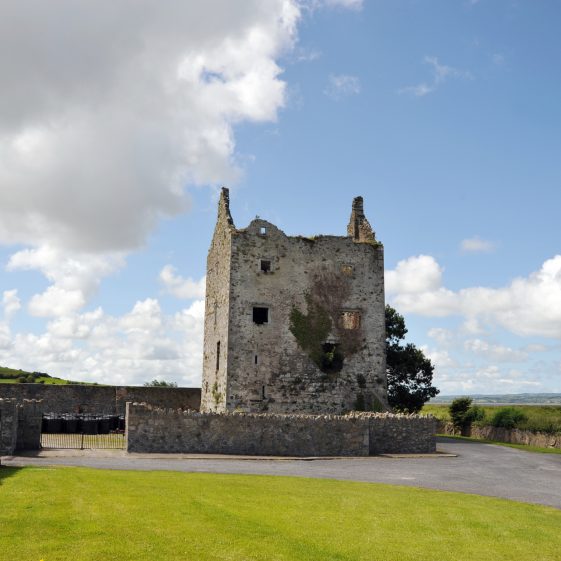 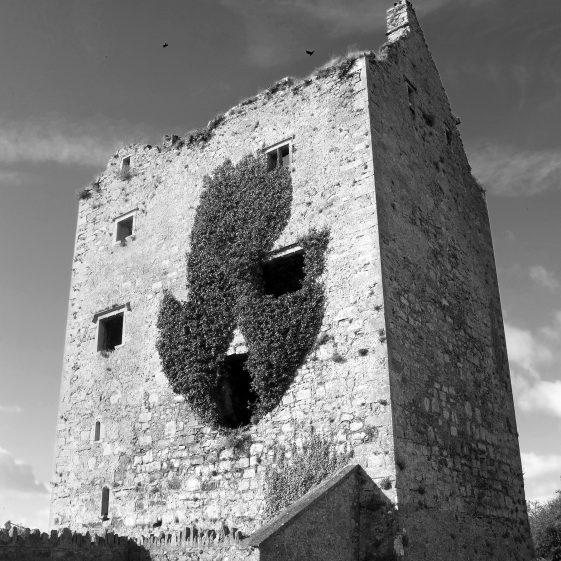 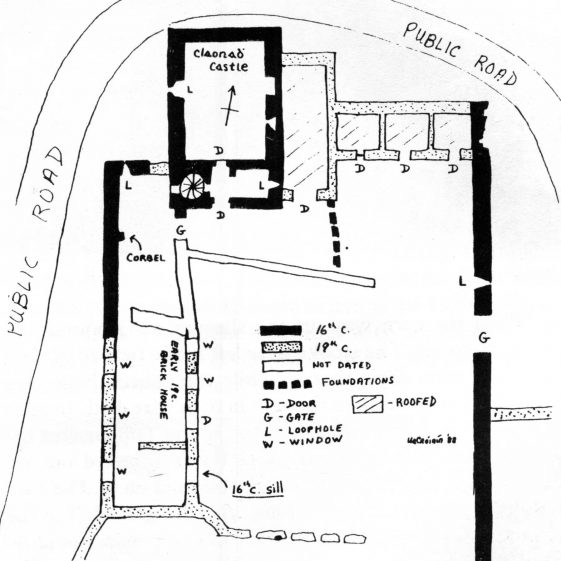 Plan of the castle and the Bawn area
Risteard Ua Cronín

This tower house, or castle is situated close to the Fergus Estuary, about 7 km from Shannon and was built in the early seventeenth century. Please note that the building is private property, and permission should be sought from the owners before entering.

The tower house of Claonadh, or Clanagh is built on a rectangular base (50 ft. x 34 ft.) and consists of four main storeys and a garret. Only the first floor rests on a stone vault which rises three feet from the ground while all the other floors were wooden. A reason for this design may have been the potential danger of the walls being forced outwards by the lateral pressure of so large a stone vault at any greater height.
The ground floor is probably the most interesting with its beautifully carved semi-circular door arches. The main door is recessed both inside and out and could have had an additional door or iron grill, which may have closed in against the conventional wooden door. Above this is the usual murder hole.

On the outside wall to the right of the main door

is a crude representation of a Sile na Gig (female figure representing lust). Most of the carving is simply inscribed on the stone save the head which is in false relief. Though these figures are common in the walls of medieval churches (e.g. Kilnaboy, Rath), they are rare in castles; however another can be seen in Bunratty Castle at the side of a window in the great hall.

Another interesting feature of the ground floor (usually called the cellar) is a little chamber, four feet square, in the thickness of the wall. This may be a well, but it was full of rubbish when we visited in 1988. If this is proven to be true it may be the first instance of indoor plumbing in the county! Also in ‘the cellar’ is a great stone ?replace (over ten feet wide) which was probably a seventeenth century innovation but it was partially bricked up again a century or so later, perhaps to conserve fuel. A strong lamp is needed to inspect this, as there is no light whatsoever in the cellar. The stairs are completely dismantled and a ladder is required to visit the next level.

Legend states that it was the last resident of Claonadh, Colonel Donough McMahon of the Austrian Army, who broke the stairs when he was forced to leave Ireland due to his involvement in Jacobite plots. He made sure that the castle would never again be used as a residence. Donough died in Australia in 1753. The tower house above the vault is rather uninteresting as all the floors and many windows etc. are missing; however there are some very good, if plain, examples of seventeenth and eighteenth century fire places set in the walls. There are also a couple of beautiful four-light stone windows although these are without their mullions. Westropp mentions carved finials on the gables but we could not find them. They are probably covered by ivy.

Ground Plan of Clenagh Castle and BawnIn spite of much vandalism and damage over the centuries, the tower house is in a fair state of preservation; the walls being solid and still well pointed, but the ivy which has taken hold almost everywhere is starting to eat slowly but surely into the fabric of the building. In the yard beside Claonadh castle many interesting little details can be seen, such as shotholes in the bawn wall, or part of a fire place in a gate pier and sixteenth century window sills in the ruins of an old farmhouse. How much of the courtyard or out offices are contemporary with the old towerhouse is diffcult to say but it lends itself to interesting speculation.

Clenagh is one of the many tower houses that have featured in a series of articles by Martin Breen and Riseard Ua Cronín, published in The Other Clare annual journal of the Shannon Archaeological and Historical Society. Detailed historical notes on Clenagh by Martin Breen may be downloaded here: History of Clenagh

Here is an extract relating to the famous harp.

Also of interest in the history of Clenagh Castle is the account of the ancient harp of Brian Boru, now at Trinity Castle, Dublin. The harp was presented to the Pope by Brian Boru’s son, Donough, with the regalia of Ireland, in about 1050 AD. Donough’s death is recorded as occurring in Rome in 1064 (3). The harp was later sent to Henry VIII, who in turn presented it to Ulick de Burgh (4) who had been created 1st Earl of Clanrickard by Henry VIII at Greenwich in 1543 (5). On the marriage of Lady Eleanor de Burgh to Turlough MacMahon of Clenagh, the harp formed part of the dowry and hung in the halls of Clenagh Castle for about a century. It then passed by intermarriage to a MacNamara, whose son presented it, in 1782, to the Hon. William Conyngham, who deposited the harp in the Trinity College collection (6). It is known that the famous Máire Rua O’Brien, nee MacMahon of Clonderlaw, spent some time during her youth at Clenagh. Her older half sister, Áine, married Mahon MacMahon of Clenagh and they had a daughter, also called Áine, who was about the same age as Máire Rua. Áine and Máire Rua maintained a lifelong friendship (7) and so the legend that Máire Rua may have played on Brian Boru’s harp at Clenagh Castle might have some truth.