You are here: HomenextPeoplenextBrendan O'Regan.

Brendan was born in Sixmilebridge in 1917 into a relatively well-off family with a tradition of enterprise and business. He attended Sixmilebridge National School and Blackrock College, after which he embarked on an intensive period of management training at up-market hotels in Germany, France, Switzerland and the UK.

Background of Business and Enterprise

Brendan’s father James operated a pub, general grocery and garage in Sixmilebridge and in 1926 bought the Old Ground Hotel which had been closed for some years. He renovated and opened the hotel two years later and was also instrumental in setting up the Ennis Chamber of Commerce.
Having completed his hotel management training, Brendan O’Regan took over the management of The Falls Hotel in Ennistymon which his father had leased for a five year period in 1938; after this Brendan managed the Stephen’s Green club in Dublin.

In the service of the State 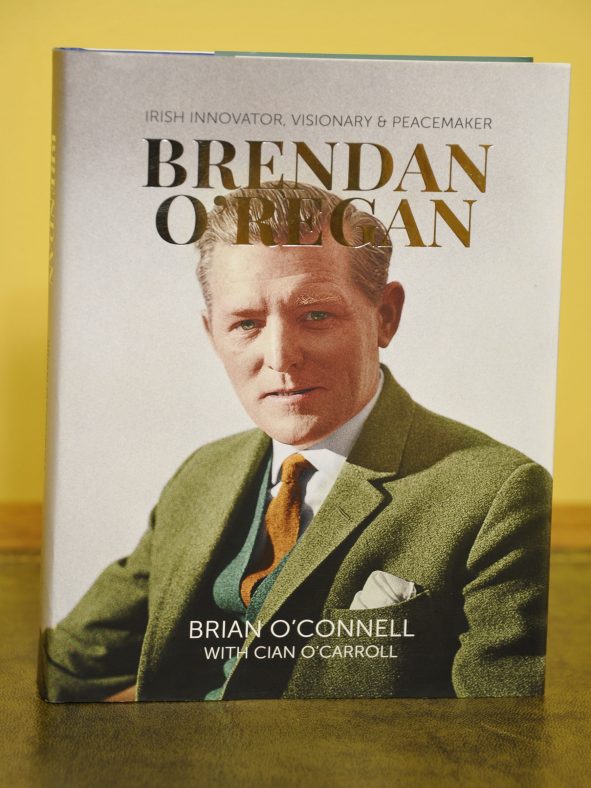 At the end of 1943, the government decided to grant him the franchise to run the catering facilities

at Foynes sea-plane base with the possibility of the franchise being extended to include the airport at Rineanna at a future time.  It was during his time at Foynes that Irish coffee was invented. In 1945 he was appointed Catering Comptroller at Shannon Airport. However the era of sea planes had come to an end and the catering business moved from Foynes across the river to Shannon Airport at Rineanna. Brendan O’Regan operated the catering business initially under the name Shannon Catering Service, later to become Sales and Catering. Unusually for a semi-state company, the business was operated on the basis that O’Regan was paid a salary plus a percentage of the profits.

From then on for more than thirty years, Brendan O’Regan was the visionary whose ideas and projects transformed the mid west of Ireland.

Notable developments under his watch.

In the 1990s, Brendan and his wife Rita lived in Newmarket on Fergus and they immediately took interest in the plight of the village. In cooperation with some equally concerned local people, including the Parish Priest Reuben Butler, Brendan organised brainstorming meetings to develop ideas and cultivate community spirit. He privately funded the purchase of the land that was to become the village park and in 1995, Obair Newmarket on Fergus Ltd. was registered. Brendan succeeded in getting finance for its earlier enterprises from Chuck Feeney. The Obair organisation has undoubtedly transformed the village and continues to do so.

In 2017, a biography of Brendan O’Regan was published by Irish Academic Press, written by Brian O’Connell with Cian O’Carroll. This lavish production chronicles his life; the marvellous developments over which he presided and innovations which he masterminded.