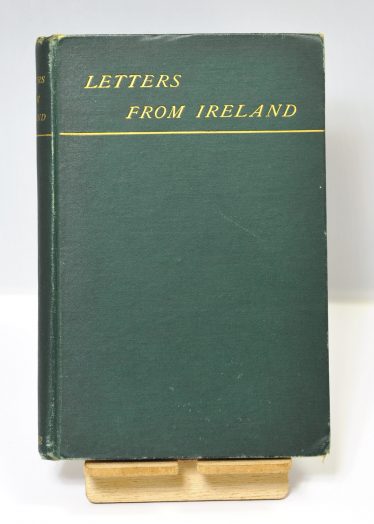 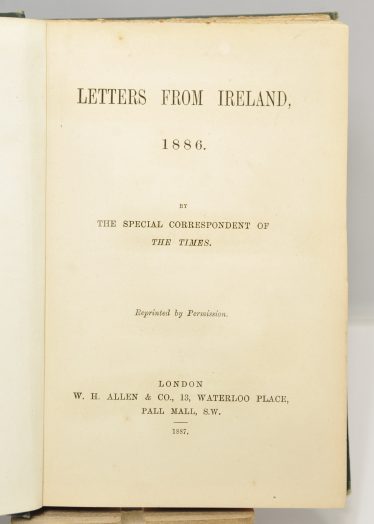 Many years ago, I came across a book with the title Letters from Ireland, published in 1887. At first glance, it didn’t seem that it might be of interest to me, but a scan through the preface and the contents revealed that the writer was a journalist working for the The Times (of London) newspaper, and that he had visited Clare.

In fact he had written his dispatch from Clare on September 20th, 1886. In all he wrote twenty five articles for The Times during a nine week tour of the country. The opening lines of his letter from Clare gives us an idea of  the scene he was encountering at that time and his attitude towards it.

It is difficult for a people at a distance to realize the complete triumph of lawlessness which prevails in many parts of Ireland.

Much of the Clare material relates to an eviction story at the townland of Killula, located between Smithtown and Newmarket on Fergus village. Three tenants of Mr Mahon the landlord had been on rent strike for over two years as part of the agitation to get back ownership of the land to the tenant farmers. This agitation was organised by The Irish Land League, which was set up in1879.
The three families in question were The O’Donnells, Mulconrys and Hickeys. The Hickeys in question were Lawrence Hickey and his wife Mary Hastings who by then had seven children, and who were my maternal great grandparents. So I had a special interest in what The Times correspondent had to write.

In fact he was relying to a large extent, on what had appeared in the Munster News newspaper on August 25th. It transpired that the three families were turned out June 28th. O Donnell and Hickey went back into possession of their houses and were committed to jail for one week. As soon as they were released, they returned to their houses and were sentenced to a second term of two and three weeks respectively. Temporary houses, also known as Sentry Boxes were then built for them by the National League. This was a common action taken by the league which had branches in virtually every parish. In the case of the three families at Killula, the scale of the operation was truly spectacular.

On the appointed day, volunteers from all over the parishes of Newmarket, Carrigerry and The Wells assembled in the village at 10 a.m. and they were joined by contingents from Ennis, Doora, Kilkishen, Clarecastle, Ballyea, Quin and many other districts. Crusheen was represented by its Patriotic Band and Tulla by its National Band. Contingents from Sixmilebridge and Cratloe led by J. Hardgrove joined the assembly at Killula Cross Roads, where there were in total about three thousand persons, and about three hundred horses and carts. Most of the carts carried stones for building the walls, some had timber for the rafters, some had straw and reed for the roofs, and some had sand and lime. The Ballyea carts had lime, and the Kilkishen carts had turf from Clonloum bog.

Confrontation with the police

One local tenant, a Mr Frost on whose land one of the Sentry Boxes was to be built, objected and got the assistance of the constabulary. The local parish priest, Fr James Loughnane, an active supporter and organiser of the Land League, addressed the crowd at Killula cross, read out a letter from Mr. Frost and suggested to the crowd that they should do what they thought best. There was general acclaim to proceed with the building of all three houses.

The following extract from the Munster News paints a picture.

A messenger arrived and stated that Mr Frost was on his land and would not allow any person to enter on it to build a house. There was great excitement at this, and some person said, “Let the people with the exception of those who are at work here take the flags and one band and proceed across the fields to Mr Frost’s land and commence operations.” This order was immediately obeyed. The scene would remind one of an army advancing by battalions, with skirmishers in front, the band playing “God Save Ireland” in the centre and each battalion carrying its flags. It was an animated scene, those hundreds of athletic Claremen bounding over walls, leaping the river, marching quickly on, and forming into a solid body as they ascended the hill to Mr Frost’s farm.

There was nothing the constabulary could do in the face of such numbers. All three sentry houses, which would have measured twenty two feet long and fourteen feet wide in the inside, were completed on that day and the three dispossessed families were housed. The two men who had been jailed served their time, and the Times correspondent reported that the families were living in the temporary accommodation when he visited; they were keeping guard over the farms from which they had been ejected and were cutting and saving their crops.
Both the O’Donnells and the Hickeys were reinstated in their houses and later were facilitated by the land acts to purchase their farms. It is unclear what happened to widow Mulconry but that surname did not appear in the census of 1901.

The article in the Munster News on August 25th, 1886 can be read in full in the accompanying PDF.