You are here: HomenextPeoplenextThomas Dineley Visits Clare in 1681

The travel writer and topographer, Thomas Dineley visited the area of Tradaree in the year 1680. He was from Worcestershire in England, and before visiting Ireland he already had toured Holland and France and written accounts of his travels. He appears to have been acquainted with Henry O’Brien, the 7th Earl of Thomond, who was resident in England. He was the son of Barnaby, the 6th Earl who had abandoned Bunratty castle in 1646.

His travels in Ireland took him from Dublin to Carlow where the Earl of Thomond had property, then on to Limerick from where is came to south Clare and it appears that he stayed in the vicinity of Bunratty for some time. In any case he commented on some of the castles and big houses of the area and did some sketches. He later traveled from Limerick to Youghal and returned to England by ship from there.

Dineley writes about the Henry Ivers and his family who lived in Mount Ivers Castle, also known as Ballyarilla, near Sixmilebridge. This residence was the one which preceded the present Mount Ivers Court, built about fifty years later. 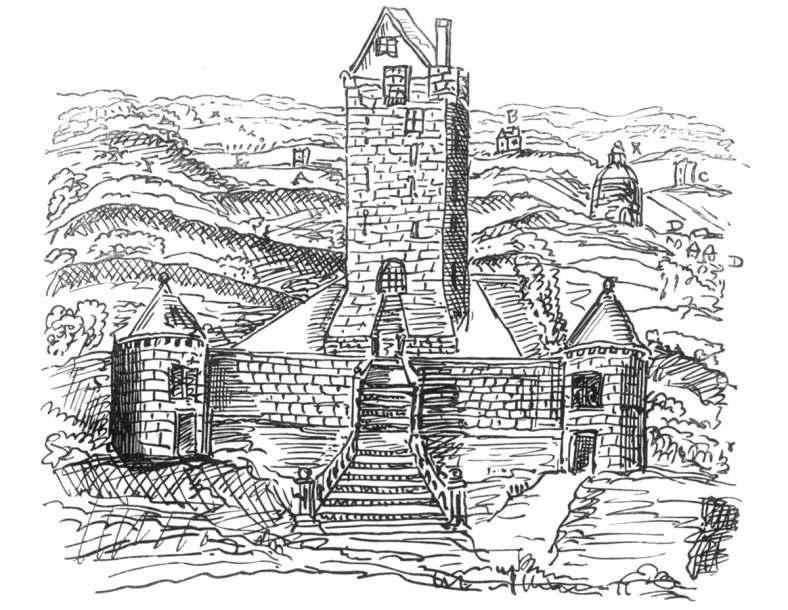 That castle belonging to Henry Ivers, Esq., well situated and capable of considerable improvement… The gentleman, owner hereof, came over (a young man, clerk to Mr Fowles, a barrister) since the King’s restoration, and had in this time by his industry, acquired one thousand pound a year. The first and chiefest of his rise was occasioned by being concerned in the revenue as a clerk to the King’s commissioners for settling quit rents and afterwards became their deputy receiver, is now in commission one of his Majesty’s justices of the peace, not worth less than sixteen hundred pounds a year.

He also visited and sketched Bunratty, and his view from the north east, the Low Road side presents an interesting vista. Across the Shannon is Carrigogunnell; the first bridge at Bunratty would not be built for another one hundred and twenty years; on the right on a hill can be seen Bunratty church and the road leads toward there rather than by the castle as it does today. 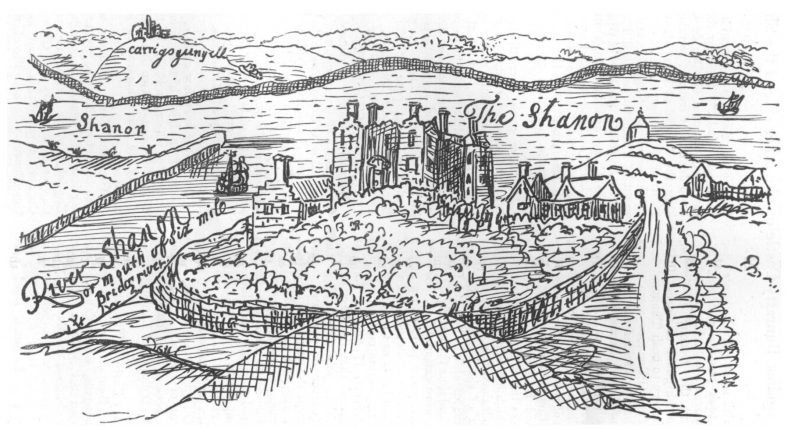 Bunratty from the North East. Shannon Arch and Hist Society

The view from the other side shows the stables now in ruins. These were located in the present day car park of the Creamery Bar and Restaurant. Dineley in his extensive account of Limerick city mentions that ships of up to two hundred tons could reach the city quays, larger ones ventured only as far as the anchorage off Bunratty. 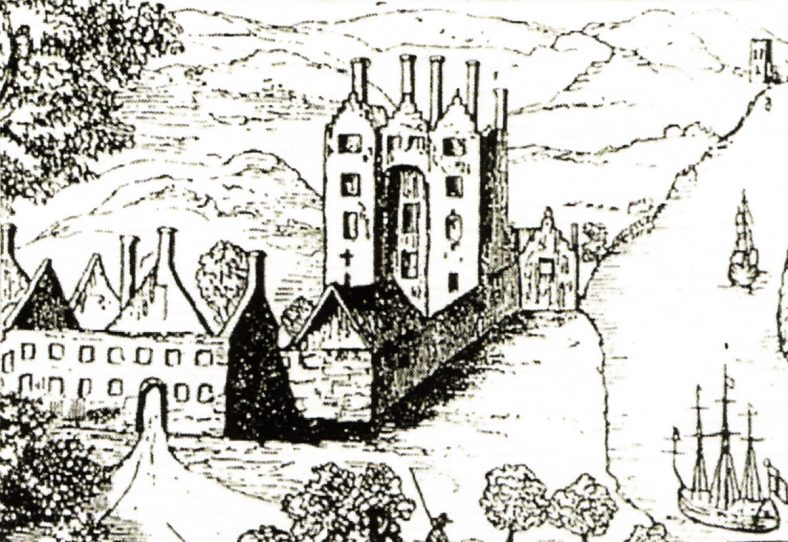 View of Bunratty castle and stables.Shannon Arch and Hist Society

Dineley then sketched Ballycar castle, which no longer exists, and makes some observations on that area. 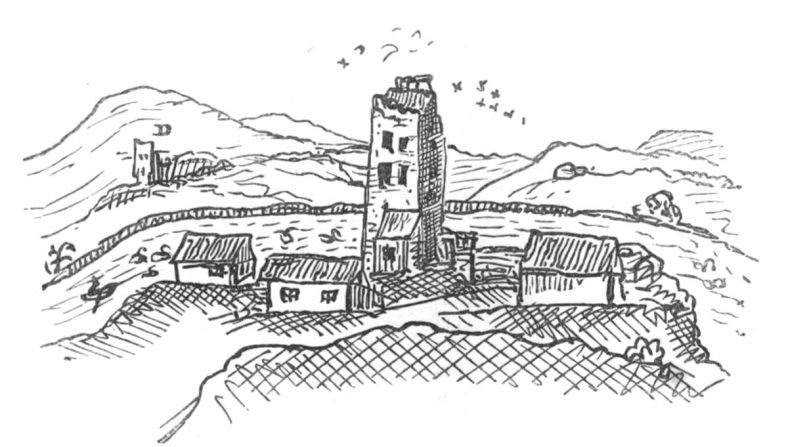 Three miles from Sixmilebridge, nine from Limerick and seven from Ennis near the road between Limerick and Galloway, which city stands twenty seven miles off, is Ballicar castle, belonging to John Colpots, Esq.; this is part of the estate of the Right Honourable Henry, Earl of Thomond, in the Barony of Bunratty, in the parish of Tomenlagh… Ballicarr Lough abounds in eels and trout, especially of a stupendous largeness for such as trout, of 30 and 24 inches in length, which very commonly have been taken out from here.

While in the area, he also visited Giles Vandeleur at Rathlahine castle, and  did a drawing of the castle and ancillary buildings. During his time at Rathlahine, Dineley observed a comet which was receiving much attention that year and included it in his sketch. 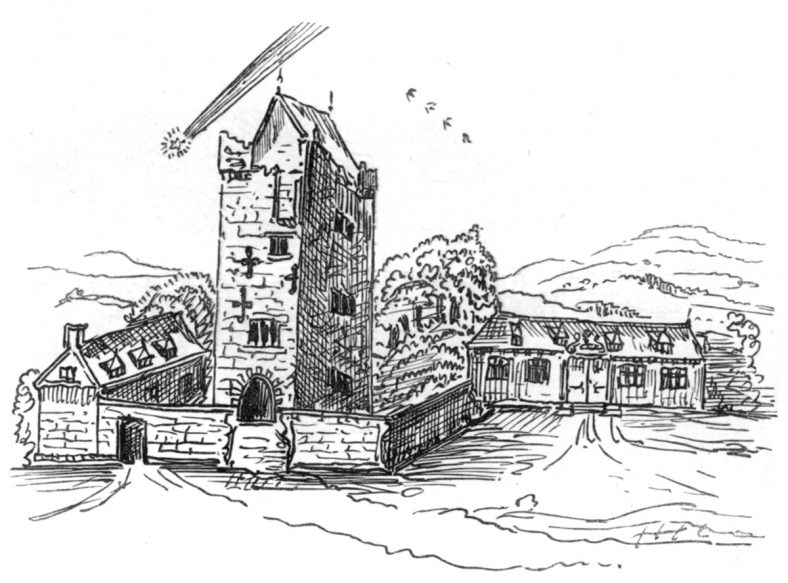 Rathlahine castle, an ancient castle built by John Mac Namarra Esq., it is founded upon and among rocks. It belonged since to Sir William King, governor of Limerick and is now in the hands of Giles Vandeleur, Esq., who has built unto it the fairest stable in the county. 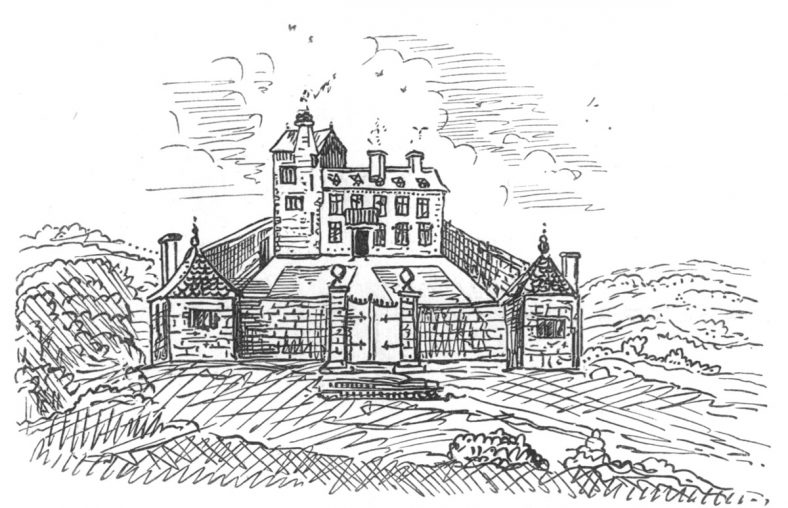 The castle of Ballyclogh, (Stonehall), was also visited and sketched by Dineley. The castle which was then occupied by Thomas Cullen, later became the residence of Sir Donat O’Brien who built a modern residence there. The castle and later house were situated in the townland of Stonehall, not far from the present aerospace building; neither building is still standing.

Dineley’s Irish travel writings were serialized in the journal of the Kilkenny and South-East of Ireland Archaeological Society, 1856-1867; the parts relating to Clare can also be read in Frost’s History of Clare, 1893 and The Stranger’s Gaze, (edited by Brian O Dálaigh),1998, Clasp Press.