You are here: HomenextPlacesnextHastings Farmhouse 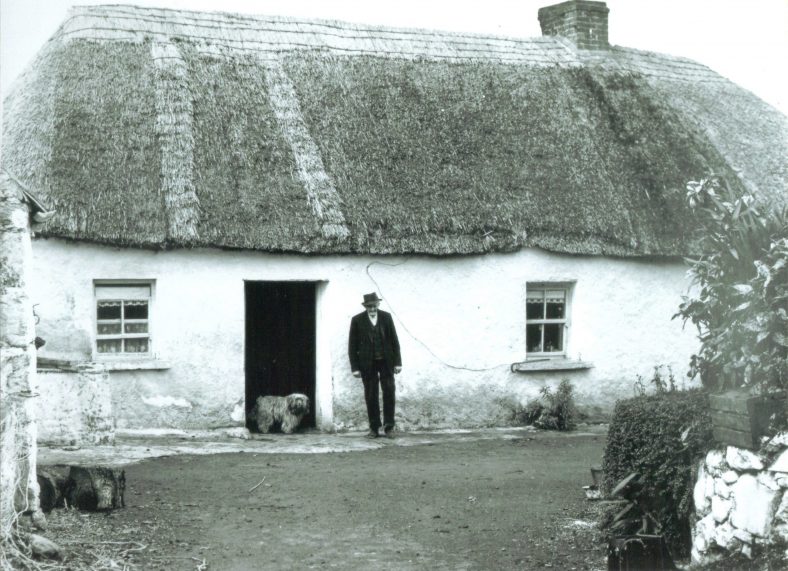 Hastings Farmhouse is the remains of a typical nineteenth century vernacular farmhouse located in Tullyvarraga townland within the modern town of Shannon. Located at the estuary end of the original routeway into Tullyvarraga, now known as the Slí na Mara boreen, today the structure is situated between the Crematorium and Illaunmanagh Cemetery.  The house, which is shown on the first edition Ordnance Survey Map of 1840, was lived in by the Hastings Family until the early 1970’s.  Unfortunately, shortly after it became empty it was vandalised and its thatched roof set on fire.Thereafter, it collapsed in on itself and over a period of forty years vegetation grew up around what remained and the building and its fascinating history (of which more later) could have been totally forgotten. 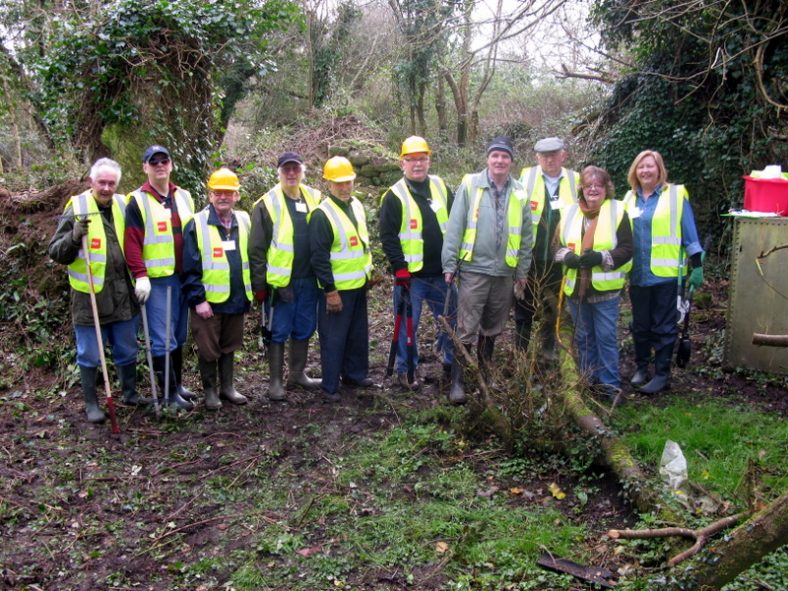 In 2012 the local heritage group Dúchas na Sionna undertook to conserve what remained of Hastings Farmhouse. As the farmhouse is in the ownership of Clare County Council the group applied to the council to have the remains declared a ‘Protected Structure’. This was done and a volunteer day in February 2012 began to uncover what remained of the building. With funds raised from local businesses, a Flag Day and a grant from the LEADER fund administered by Clare Local Development Company, a conservation specialist was engaged to consolidate the walls.  A surprising discovery at this stage was that the house was partly constructed of cob (a mixture of clay and a binding material such as straw) an unusual building material for this part of County Clare where stone is more commonly used. 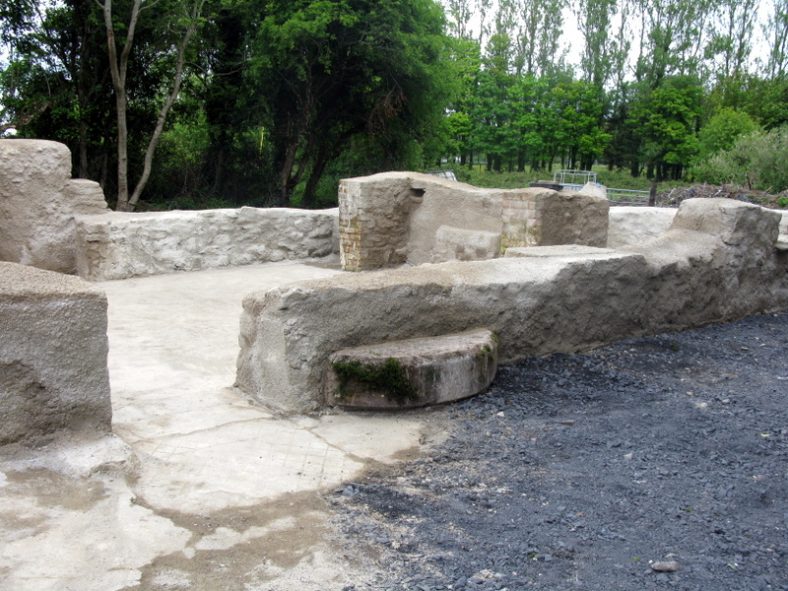 An exciting new stage in the conservation of the farmhouse is about to commence.  Dúchas na Sionna are embarking on an ambitious project to fully restore the farmhouse for use as a heritage and education centre to provide training in traditional building and craft techniques. More details of this venture will be unfolded on this website as the plans are formalised.

The house and outbuildings 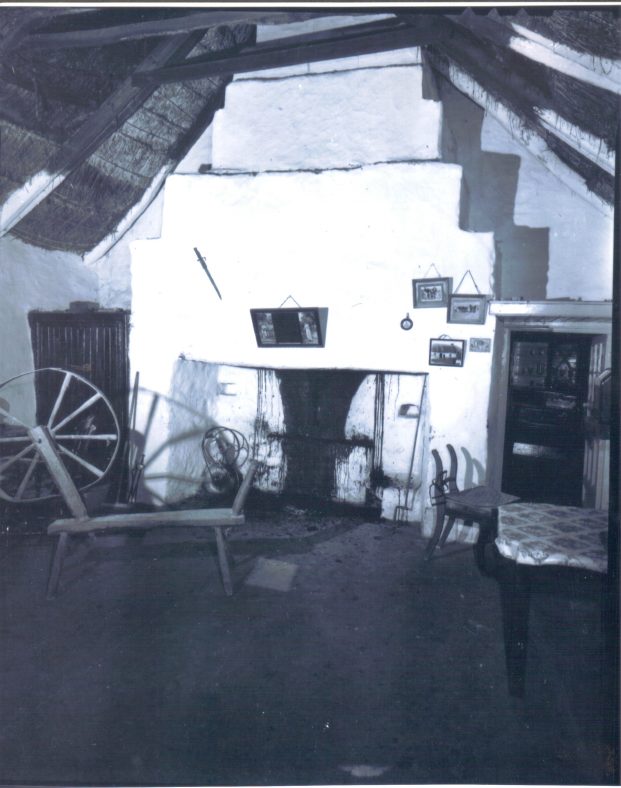 The house was a typical small farmhouse of the nineteenth century.  Rectangular in plan, it was a low one-storey, hip-roofed, thatched dwelling with the windows and doors in the side walls.  As was usual, one entered directly into the main kitchen/living area. This was the largest room in the house with a large fireplace at one end and two small bedrooms opening off the opposite end.  A small parlour was entered through a doorway beside the fireplace.  A loft over the bedroom end of the house provided extra sleeping accommodation and storage.  There was no electricity or running water in the house; all the cooking was done over the open fire, light was provided by kerosene lamps or candles and water was fetched from a nearby well.  A water trough located at one end of the building caught ‘run-off’ from the thatched roof and this provided the water for animals, washing or for use in domestic chores. 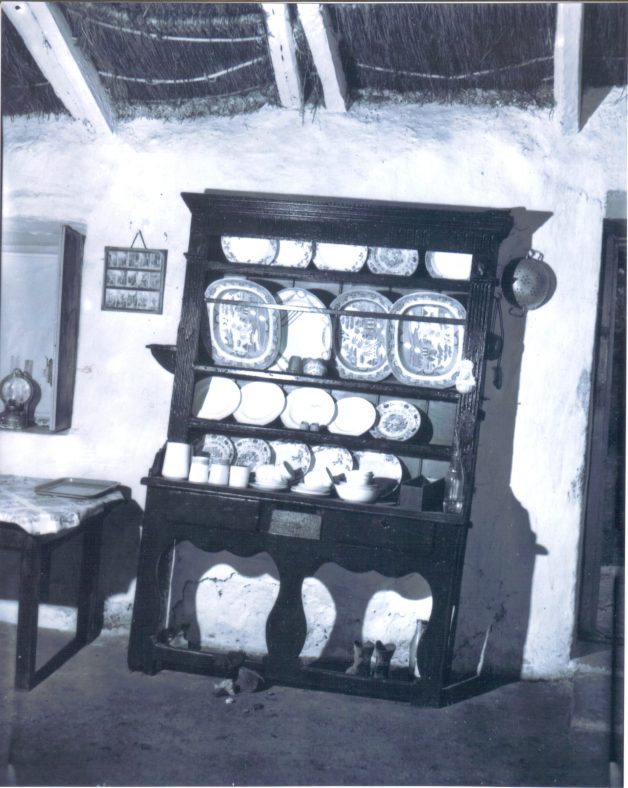 A large outhouse is attached to the western end of the house and two small structures behind are all that remain of nine outbuildings listed in the the 1911 census returns on the Hastings property.  They consisted of a stable, a cow house, two calf-houses, a dairy, a piggery, a fowl house, a barn and a shed. 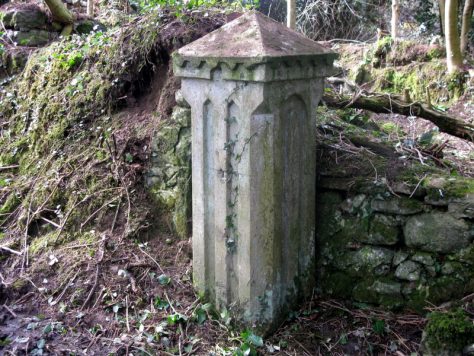 One of a set of piers flanking the entrance to Hastings Farmhouse. Olive Carey.

A fine set of concrete piers is located close to the eastern end of the house, flanking the approach to the front yard.  These are similar to other piers in neighbouring townlands and were reputedly made by Bob Frost, a local craftsman who was working in this area in the early part of the 20th century.  P.J. Reidy, who was interviewed for the Shannon Social History Project describes the process of making the piers: They’d pour concrete into a timber mold.  They used to rub oil on to them at that time and the concrete wouldn’t stick to the oil then.  And even the grain of the timber appeared on some of them then’.  Mary Hanley, also interviewed, remembers that the piers were painted silver and indeed traces of the silver paint can still be seen.

The first mention of the Hastings Family in Tullyvarraga dates to Griffith’s Valuation in the 1850s.  It lists John Hastings as owning 29 acres, 1 rood and 2 perches in Tullyvarraga townland.He died in 1877 aged 67 years. John’s son Daniel Hastings, born in 1853/4, married Mary Sweeney of Clonmoney in 1880 and they had six children, John, Thomas, Bridget, Michael, Anne and James. Daniel died in 1888 leaving Mary to raise her family alone.  In the 1901 and 1911 census Mary is shown as the head of the family and John, Thomas, Bridget and Anne lived in the family home.  Two of the children, Michael and James are not mentioned in either census.  We do not know what happened to them but it may be that, as was so frequent in those days, they died in childhood.  Mary Hastings died in 1926 and is buried in Bunratty churchyard.  John Hastings lived in the farmhouse until his death in the early 1970s.  Born in 1881 he was the last of the Hastings family to live in Tullyvarraga.  He married Margaret (Maggie Simon) in 1931.  John and Maggie had no children.

John and Maggie  Hastings are well remembered by people who lived in the locality.  Mary Hanley and her brother Pat O’Brien grew up in Smithstown and recall accompanying their parents on Sunday evening visits to the Hastings farmhouse.  Mary recalls that her father and John Hastings would spend many hours talking about the War of Independence and the Civil War.  While the men recounted stories to each other Mary’s mother and Maggie would read the latest copy of Ireland’s Own magazine. Mary loved to turn the bellows and would be reprimanded by Maggie when she did it too vigorously thus burning up the fuel too quickly.  Mary also remembers helping to make butter in the big churn in the kitchen and working in the fields in the summer.

Another visitor to the Hastings was John O’Brien of Drumline. He and his mother used to cycle along the Slí na Mara routeway into Hastings.  His memoir of those boyhood visits is attached.

Locally Hastings Farmhouse is best remembered as one of the ‘safe-houses’ where General Lucas was held during the War of Independence.  The capture of General Cuthbert Tyndall Lucas, the highest ranking British Officer to be captured during the War of Independence, sparked the greatest manhunt that the British Forces ever mounted in Ireland.  It was widely reported, appearing in the London, New York and Singapore times.  See the post on General Lucas for the full story.