You are here: HomenextTopicsnextThe 1938 strike at Rineanna Airport

The 1938 strike at Rineanna Airport 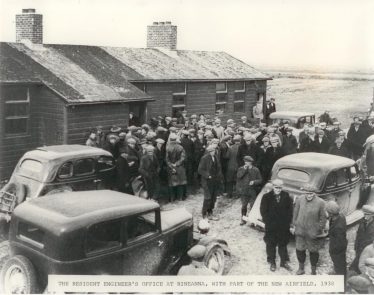 In the mid-1930s a site at the junction of the Fergus and Shannon Estuaries in south Clare was chosen as the most suitable site for Ireland’s first transatlantic air base. The choice of site was endorsed by Col. Charles Lindbergh and work soon commenced on draining 760 acres of marshland in the townlands of Kilconry and Rineanna.  Initially anounced as Kilconry Airport by the Irish Government, and subsequently called Rineanna Airport; this too was abandoned and  the name of Shannon Airport was finally decided on.  A seaplane base at Foynes on the Limerick shore of the Shannon Estuary was the first port of call for transatlantic flights while the site at Rineanna was under construction.

The workforce was drawn from the immediate hinterland of Rineanna and further afield. At the beginning of 1938 between six and seven hundred men were employed digging drainage ditches and constructing roads and buildings. Draining the land involved digging a network of drains and laying almost 120 miles of concrete pipes.  The drains had to be dug by hand as the saturated land could not support heavy machinery.

From the start the men were not content with the level of pay they received for the arduous work involved.  As early as December 1936 Deputy Patrick Hogan Labour TD for Clare raised a question in the Dáil as to whether the 27/- for a 48 hour week then being paid to the men at the Rineanna airbase was a fair wage. By 1938 the wage for unskilled labourers had been raised to 32/- a week but this still fell short of the 35/- a week being paid to County Council workers engaged on building a road in the vicinity of the airport and of the 37/- per week paid by the Pioneer Road Construction Company who had the contract for road construction at the base.  In addition, the 32/- per week was subject to deductions for ‘broken time’ the term used when work was stopped due to bad weather. Even if the men managed to earn the full 32/- per week it was considered barely enough for a single man to live on let alone a married man with a family to support.

In January1938 the Rineanna workers met at the courthouse in Newmarket-on-Fergus and formed the Rineanna Labour Union.  A letter was submitted to the Office of Public Works demanding an 6d per hour increase in the rate of wages for unskilled labourers, 7d an hour for pipe layers and a 5/- a day increase for carters.   The increases would mean that unskilled labourers would receive 56/- a week, pipe layers 64/- a week and carter 14/- a day.  When it became evident that the Commissioners would not engage in negotiations on the rate of pay, notice to strike within a week was sent to the Office of Works. At 10.00 am on Monday 21st February when the strike notice ran out over 600 men handed in their spades, shovels, picks and other tools together with their rubber boots to the site office.  A rota for manning the picket line was drawn up and the strike that was to last for ten weeks began.  This was a serious undertaking for the men who did not have the safety net of ‘strike pay’ from The Transport and General Workers Union.

The strike was debated in the Dáil on the 9th March when Deputy Patrick Hogan referred to the ‘starvation wages’ that the men were expected to live on and declared the position of the Government as ‘…one of the most disgraceful exhibitions of parsimony on the part of the Government that has been given since the Government came to power’. During the debate Deputy Hogan gave a breakdown of what it would cost the workers to stay at the airbase.  The cost of three meals a day for seven days amounted to 17/6d. A cubicle in one of the huts cost 3/- plus 1/- a week for laundry.  That came to a total of 21/6d and added to that was 1/5d or 1/6d for National health insurance.  If the labourer who availed of the accommodation and food provided was a married man this meant that he was left with 9/- a week to support his wife and children.  The food provided was listed as follows:

By the end of April the energy for strike had run out and a meeting was held in the Temperance Hall in Newmarket-on-Fergus to ascertain if the men wished to return to work. A vote was taken, and the men voted 77 to 7 to return to work. Thus, the strike which had lasted for ten weeks and caused untold hardship for the men and their families ended with no change in the rate of wages.

An editorial in The Clare Champion on the 14th May reported that by going back to work the men had attracted more attention to their case than was gained throughout their ten-week strike.  A representative local committee was then entrusted with the task of drafting a formal statement of their grievances and their claims.  The committee was obviously successful in their negotiations  because on Saturday May 28th the Clare Champion reported that agreement had been reached for a three shilling a week rise to 35/- a week for unskilled labour with appropriate adjustments for other basic rates.

By April1942 the men employed by the Board of Works were yet again feeling aggrieved at the level of their wages. The men issued a demand for a 5/- increase bringing their pay to £2 a week.  When no reply had been received by the 30th June the men voted to go on strike beginning on the 4th of July 1942.

Although this strike was even more protracted than the previous one, there were fewer men involved (approximately 180 men) and it did not receive the same kind of media coverage as that afforded the 1938 strike.  It received a scant mention in a Dáil debate on the 4th November 1942 and after six months it finally ended when winter storms threatened to breach the embankments.