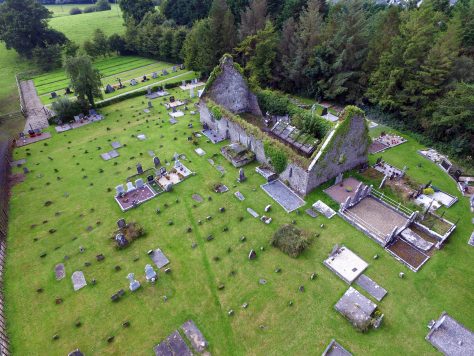 Drone photograph of Bunratty Graveyard from the south east. 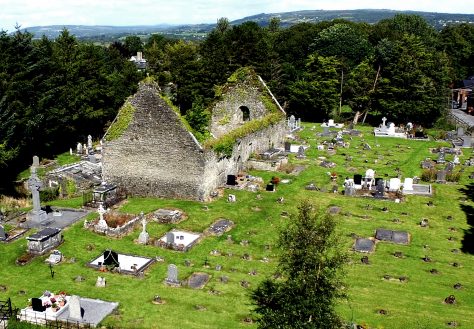 Aerial view of Bunratty Graveyard from the south-west. At the left is the large Studdert Family vault.

The Normans’ arrival in Ireland coincided with a reorganisation of the church system. The formation of Parishes was a process that developed over some years, but was accelerated by the Normans.

The earlier system was based on monastic foundations, where the descendants of the original donor of the ecclesiastical site were the hereditary Coarbs, and the hereditary tenants of these lands were the Erenaghs. These monastic establishments provided temporal as well as spiritual services for the people of the surrounding areas. In transforming from the monastic system, to the parish and diocese model, the traditional Coarbs and Erenaghs had to be accommodated and so, the parishes generally followed ancient clan territories.

The Parish of Bunratty

The Parish of Bunratty was established by the Norman Knight, Robert de Muscregros in the 1250s, and the original church would have occupied the same the site as the present one. The surrounding Grave yard, or church yard, dates back over 800 years, and over thirty generations of natives and newcomers are buried here. The majority of grave markers are without inscription, and when contrasted with the chest tombs, vaults, mausoleums and elaborately carved headstones, the disparity of wealth and entitlement in centuries gone by becomes very apparent.

Following  the reformation and the English policy of Surrender and re-grant, which involved the Gaelic lords relinquishing their titles, signing up to the Protestant religious code and then adopting English titles and customs, this church became used by the small Protestant community of the Earl’s retainers and tenants, in the sixteenth century.

The graveyard is especially interesting because of the variety of tombs that are to be seen. Probably the most impressive in terms of size is the Studdert Vault, to the north of the church. The Studderts were an Anglo-Irish family who once owned and lived in Bunratty Castle after the departure of the O’Briens. The graveyard is the resting place for many of the other Anglo Irish families who were in possession of most of the rich farmland until the late nineteenth century. They would have held the land either as free holders (as in the case of the Studderts,) or as holders of long leases from absentee landlords. Within the church building there are the graves of the Dawsons, Daltons, Pallisers, and a vault of the Butlers, all members of this landed class.

One of the very unusual items is the grave with a no body in it, and a Kipling Memorial at its head. This is to record Private Williams of the British army who was drowned in the river, having come off his motor bike at Bunratty Bridge, on July 10, 1921, the day before the truce in the War of Independence. The bridge had been sabotaged the previous night by the IRA. His body was found some days later and buried by a local farmer in land near the river, but the body could subsequently never be found for re-burial.

There are fine examples of exquisite stone carving and lettering to be seen throughout the graveyard. Among them are the Kean grave slabs inside the gate, Mc Namara grave slabs near the centre, and the Considine memorial plaque beside the church door. 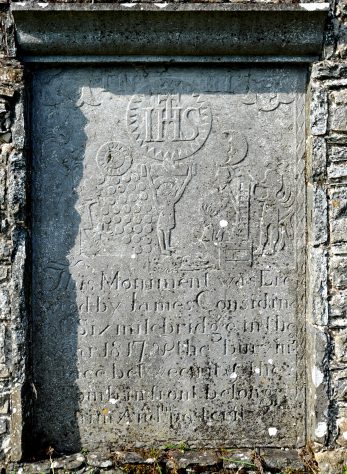 Considine Memorial, Bunratty Graveyard at the right of the church doorway. 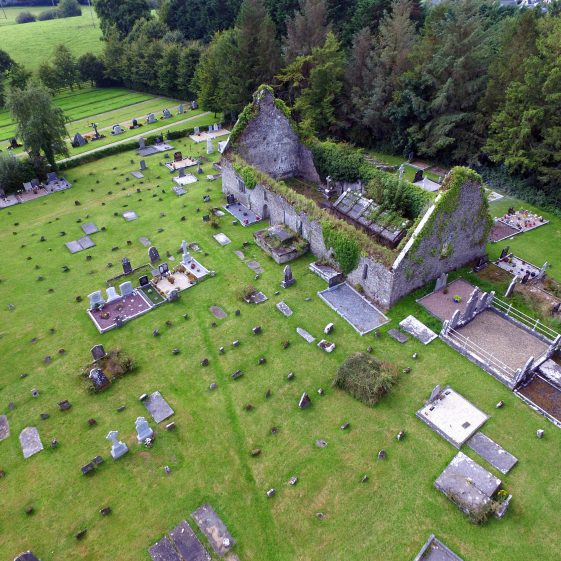 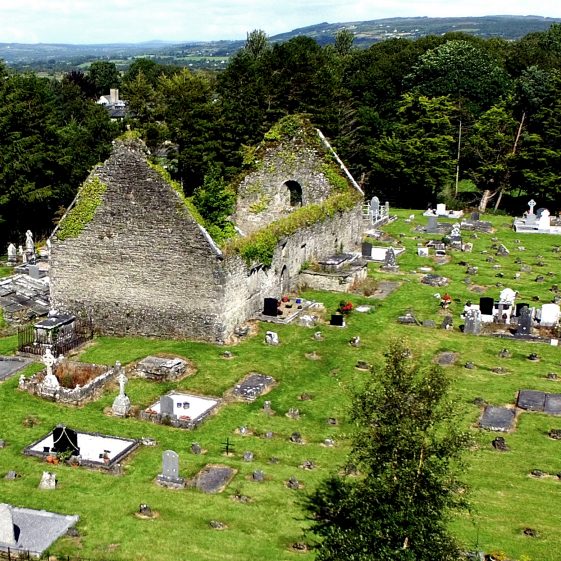 Aerial view of Bunratty Graveyard from the south-west. At the left is the large Studdert Family vault.
John O'Brien 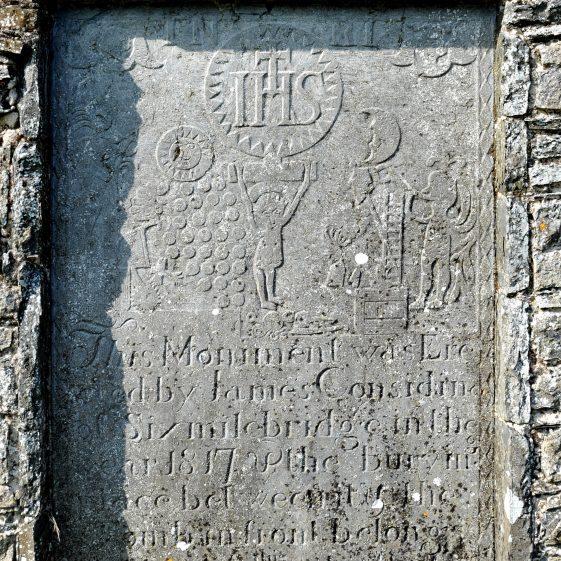