Slí na Mara Boreen is part of the original routeway into the townland of Tullyvarraga. The route is shown on the 1840 first edition OS map of the area skirting the eastern side of Tullyvarraga Hill and continuing towards the estuary to the south.  Hastings Farmhouse is the last dwelling at the southern end of the route. The northern end continued for some distance beyond what now marks the beginning of the route opposite the Oakwood Hotel. 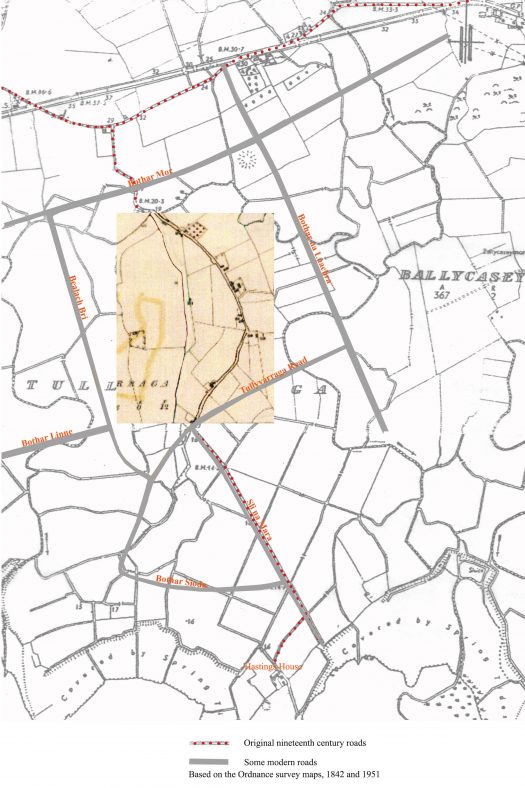 Composite map showing extract from First Ordnance map and some of the modern road system, based on Ordnance Survey Maps, 1840 and 1951. Dúchas na Sionna

The 1840 map shows several dwellings along the route. At the end of the nineteenth century the following families lived in Tullyvarraga: Hastings, Keyes, Mc Inerneys, Mc Namaras, Minihans and O’Gormans.  Two of the houses, Hastings and O’Gorman’s survived into the 1970s and the small thatched cottage, now a Pizza Restaurant but originally known as Power’s Cottage, is the only building that survives intact along the route. 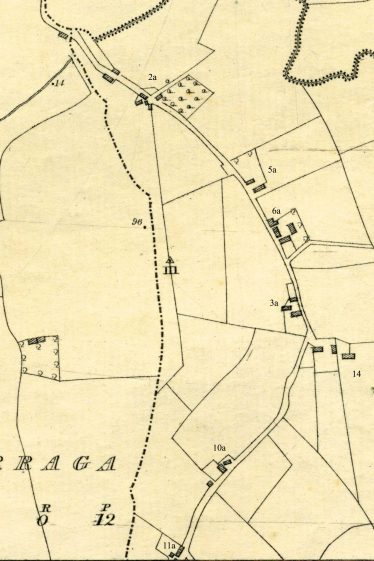 Built in 1914 by Harry Power who lived in Dangan, near Quin, the house was used in the summer when the family saved hay on land they owned in Tullyvarraga.  Nearby was a well which was known as Tobar Chríost (The well of Christ). When you were working all day in the field, we’d bring our food with us and bottles of tea which would go cold.  “Then we began makin’ tea in the house. My father and his brothers used to sleep there when they’d be savin’ the hay”. (Michael Power, Shannon Social History Project – Interviewed 11/10/2012). 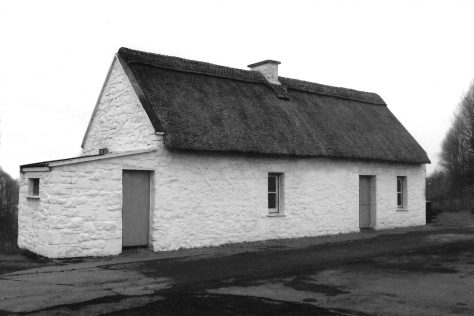 Until the middle of the twentienth century it was common for people to gather in houses to entertain themselves with story-telling, playing music and dancing.  This was known as going ‘ar cúairt’ (going on a visit).  Power’s was one such house where people gathered. “The little thatched house where they serve meals at the side of the road, every Saturday night we’d go down there dancing sets.  There was only one kitchen in it and a single bedroom.  We used to go down there and there would be a local musician there or else the gramophone”. (Paddy Keane, Shannon Social History Project – interviewed 01/10/2013).

The History of the O’Gorman family in Tullyvarraga can be traced back to 1855 when John Gorman is listed as a land owner in Tullyvarraga.  Early residents of Shannon Town remember brother and sister John and Ellen O’Gorman, as they sat outside the house in the evening time, chatting to passers-by. 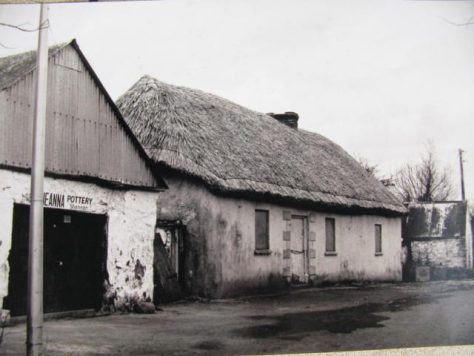 Relatives who visited in the 1950s and 60s remember a very traditional lifestyle which stood in marked contrast to that of the residents of the modern town that was then beginning to grow around it.  Cows were milked by hand, butter was churned and water fetched from the well.  The rosary was said by candlelight every evening and a small altar containing a statue of the Virgin Mary stood by the roadside opposite the cottage.  The house furnishings were typically sparse: a dresser which held all of the family tableware, a table and a bench to sit on.  A water basin for washing completed the furnishing in the kitchen. A loft over the two small bedrooms held treasures such as a spinning wheel and a harp.

” I remember the O’Gormans very well.  We would always get coconut sweets when we called in.  There were very few children around then so it was a novelty when we would go in there”. (Mary Hanley, Social History Project. Interviewed 14/07/2011). 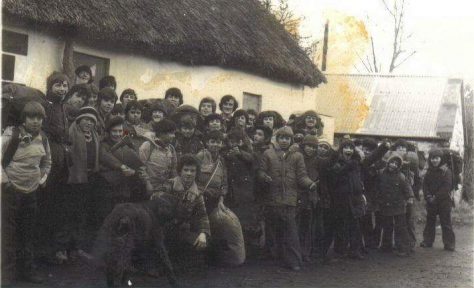 In the mid-1970s the drama group Shannon Players rehearsed here and the Shannon scouting organisation used it as a meeting hall. 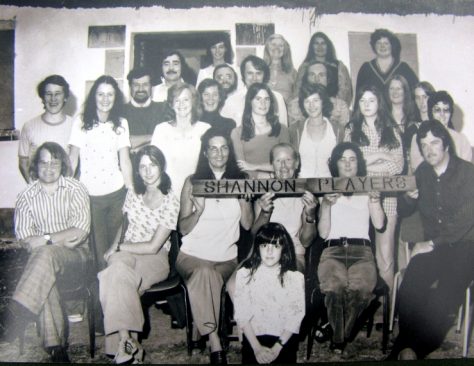 A local craftsman, Max Halliday ran his pottery business from the barn beside the cottage. “So I went out on my own down on the boreen opposite St. Conaire’s.  I think I might have been there fourteen years altogether in an old cowshed.  The cottage got vandalised and it was always sopping wet but we had happy days down there”. Max Halliday, Shannon Social History Project. Interviewed 18/02/2013).