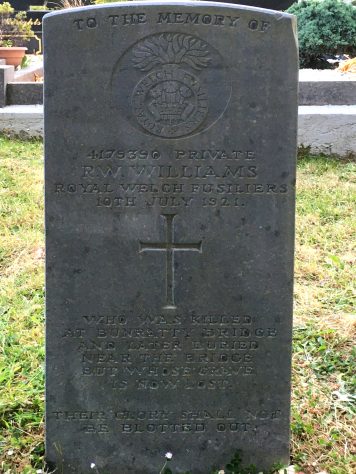 THE GRAVEYARD IN BUNRATTY is beautiful and features a notable gravestone, over an empty grave, of Private R.W. Williams.

Born into a working class family in Birkenhead, he lied about his age to join the British army early. Two years later, in July 1921, he was still only 19 when stationed in Limerick during the War of Independence. He was one of two motorcycle dispatch riders who attempted to cross the bridge at Bunratty. The local IRA unit however had bombed the bridge and although it didn’t collapse there was a crack which the motorcycle hit at speed. Both soldiers fell into the river below but whereas one swam to safety, Williams hit his head on the way down and was unconscious before hitting the water. He was drowned and his body swept away. On the very next day, a truce came into effect between the IRA and British army, making Williams the last British soldier to die in Clare.

Body Found
About two weeks later, his body was washed up in the bulrushes on the eastern bank, 200 yards north of the bridge. A local farmer brought him ashore and buried him nearby. Later the British army sought the repatriation of his remains and this was agreed to by the Irish Free State. Our army however then spent several days digging up the area, assisted by the local farmer, but could not find it. They concluded that the remains had sunk too deeply into the marshy grounds.

Instead this ‘Kipling Memorial’ was placed at the nearest graveyard. The wording of these memorials, which can be found worldwide and dotted along the Western Front, was devised by Rudyard Kipling (author of If…, the Jungle Book and much more). He himself lost his only son, aged 18, in WW1.