The Birth of a Town

The 1950s marked a period of severe economic stagnation and rising emigration levels in Ireland.  It was clear that the protectionist policies of the previous decades were holding back the development of industry in Ireland. However, by the late 1950s the Whitaker report heralded fresh thinking and new approaches. Seán Lemass, the Minister for Industry and Commerce in 1957 was to the fore in promoting the concept of outward looking polices and was ‘enthusiastic to see emerging in Shannon a movement that typified and symbolised the policies he was spearheading’.

With reduced traffic through the airport due to the advent of the longer-range jet engine which negated the need for re-fuelling at Shannon, Brendan O’Regan and his Sales & Catering team were charged with investigating the potential for increasing freight and passenger traffic through the airport.  The result was the establishment of Shannon Free Airport Development Authority (SFADCO) in January 1959. Taking advantage of the tax free incentives available the Company quickly set about attracting foreign multinationals to the area with the lure of advance factories, tax free exemptions and grants, relatively cheap labour and the strategic location beside the airport which allowed for easy transport of goods around the world. 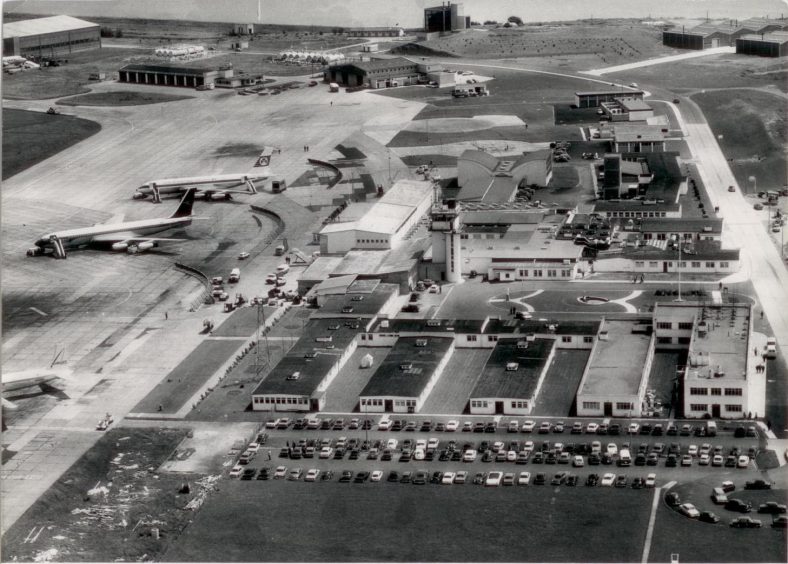 On April 4th 1960 Mr. Erskine Childers, the Minister for Transport and Power was in Shannon for the opening of the first new advance built factory, that of W.B. Pink Ltd. At the time of the opening of the Pink factory a total of eight industries were already committed to taking up factories at Shannon including Rippen, the Dutch Piano manufacturers who were soon to take possession of the industrial estate’s first custom built factory.  The Irish Times reported that ‘negotiations were under way with six British, five American, three Irish, one Dutch, one French and one German firm for other Shannon factories. 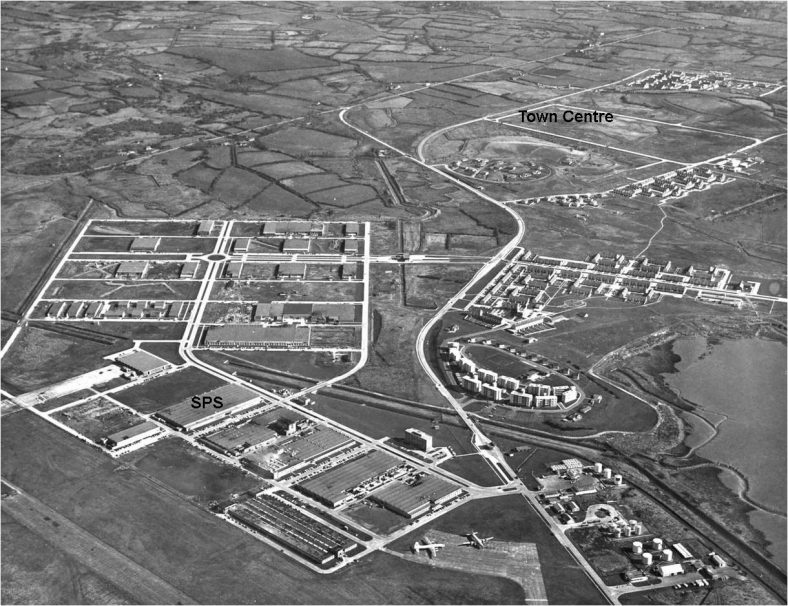 Shannon Industrial Estate and the beginnings of the town – early 1960s. SPS, Shannon

Later that year Brendan O’Regan reported that the demand for industrial space is such that ‘we can without undue optimism, fix on a target of 9,000 workers within seven or eight years’.

Within a year of beginning to build the advance factories promotions undertaken by SFADCo were bearing fruit and Shannon was already being seen as a success story. One of the first companies to open on the industrial estate was Rippen a Dutch piano manufacturing company. 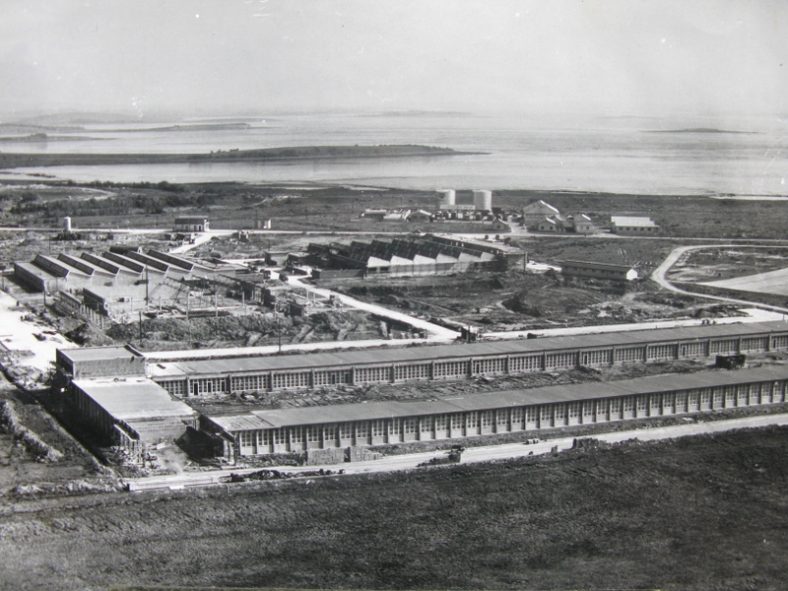 The official opening of the Rippen Piano factory was held on the 19th July 1961.  Bas Kardol and Nico Rippen, both recent arrivals in Shannon were joint Managing Directors of the Shannon Plant.  For the occasion ten Irish pianists and ten Dutch pianists were to play the Rippen pianos.  Bas Kardol describes what happened when both groups of pianists were due to arrive at the same time on flights from Dublin and Amsterdam. 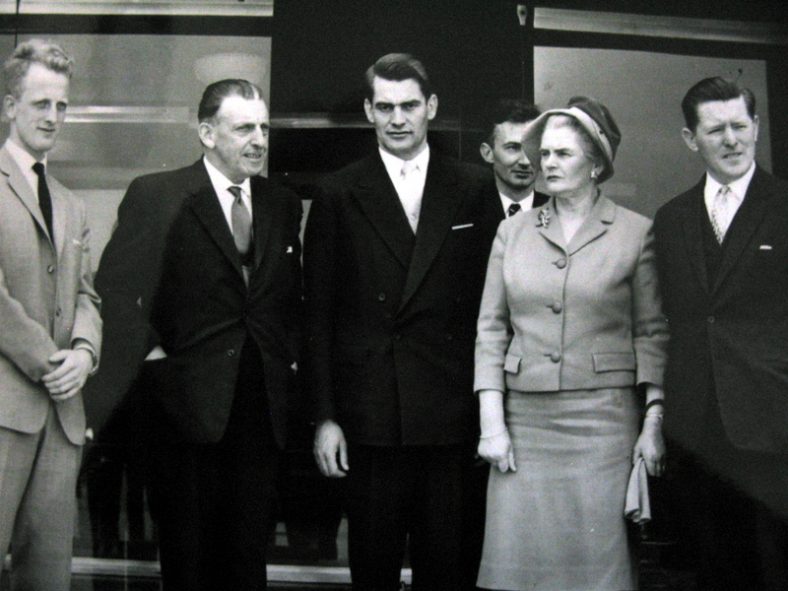 ‘Traffic Control at Shannon Airport were very co-operative.  The flight from Dublin was kept in the air until the plane from Amsterdam had landed, thus giving Mr. Rippen (ex the A’dam fight) the opportunity to welcome the guests from Dublin’.

The Irish Times reported that the Irish pianists led by Dr. A.J. Potter played a special arrangement of the traditional tune ‘Finnegan’s Wake’ and the Dutch pianists played ‘Piet Hein’ a traditional Dutch tune at the opening of the factory by Mr. Childers, Minister for Transport and Power.  The Irish Times article continued with an account of the speeches that were made by company officials:

‘The factory at Shannon is already as big as the parent company in Holland… It would not be long before the factory would be enlarged, its output increased and its labour force enlarged’.

Officials of the company explained that the model of piano that was being manufactured at Shannon represented the greatest advance in piano making in over a hundred years.  The Rippen piano could be folded together to be half the size and weight of other small pianos.  There was a market for over 250,000 pianos in the United States and Britain alone and it was imperative that the factory be situated as close to an airport as possible to facilitate transport.  For that reason it was important that the factory was situated at Shannon Airport.

‘Also present on the day were a party of Dutch journalists and industrialists from Amsterdam flown over by the Rippen Company to attend the opening and to watch the loading of pianos a mere hundred metres from the factory door’. 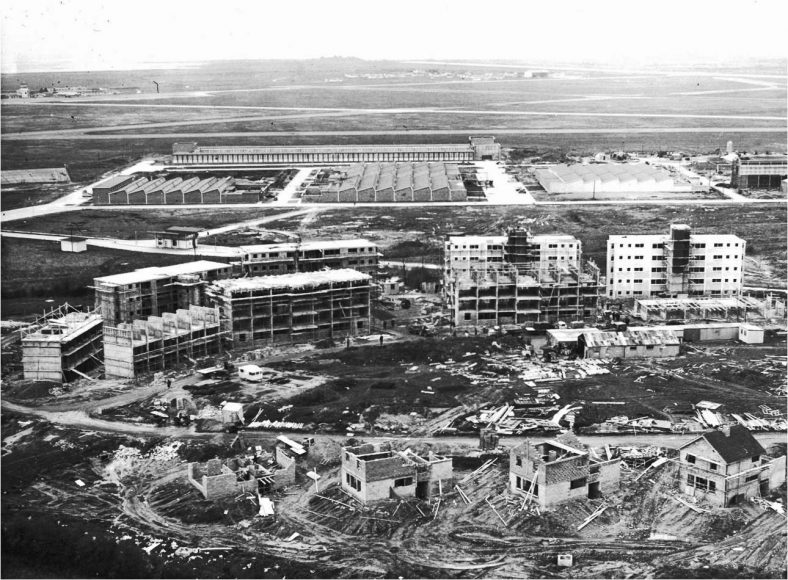 Very early on it was realised that in order to support the fledgling industrial estate local accommodation for workers and executives was required.  The company began by building 136 modern flats and ten executive houses on Drumgeely Hill, a low eminence on the perimeter of the airport and adjacent to the industrial estate.  As early as 1960 the plan for a new town at Shannon was beginning to take shape at the Shannon Free Airport Development Company but the government wasn’t yet ready to acknowledge the need for a town and instead gave permission for piecemeal development as new accommodation was required.  The Company drew on experience from abroad, looking in particular at New Town Development in England in the post war era. 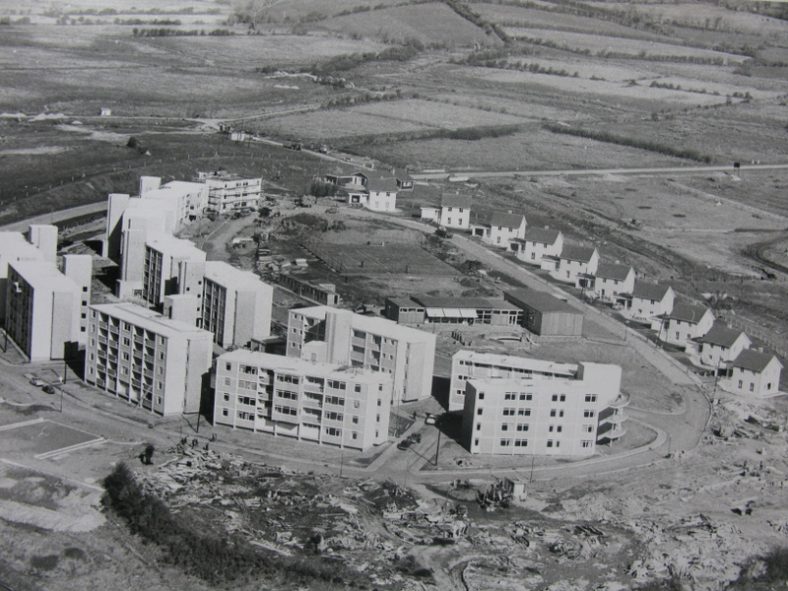 In January 1962 an Outline Development Plan was ready for the new town.  Based on a short term population target of 6,000, architects Downes, Meades & Robinson in association with a town planner Frederick Rogerson, drew up a master plan for the town.  The long term population projections for the town were envisaged to be in the region of 25,000 – 35,000 and the plan recommended designating the development of up to 3000 acres for industry, housing and associated development. Seán Ó Nuanáin explains:

‘The original plan was to have a town all the way to Bunratty on the estuary side of the road.  At one time it was shown for a road to continue along Corrib Road out onto the Bank and along towards Bunratty.  That would be an amenity road with visual access to the estuary.  That’s why Corrib Drive looks like our Champs D’Elysses’.

A reappraisal of the ODP in 1972 by Shephard Fidler acknowledged that the projected figures were unlikely to be realised but even then thought that Shannon was capable of growing to 50,000 by the year 2000.