You are here: HomenextPlacesnextDrumline Graveyard 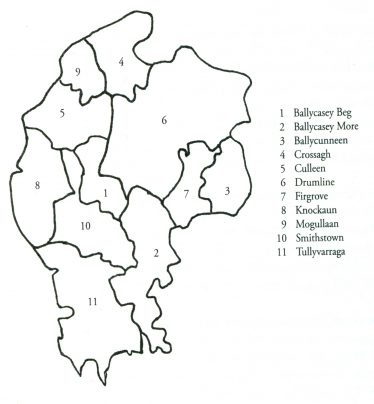 zoom
Map of the ancient Parish of Drumline
John O'Brien 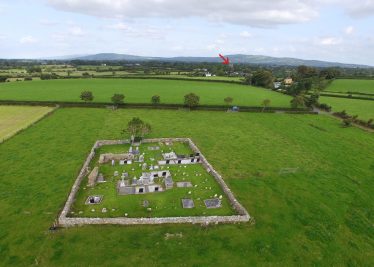 zoom
Drumline Graveyard, in the background, is Drumline Towerhouse, marked by a red arrow.
John O'Brien

Drumline was one of the seven ancient parishes  of Newmarket on Fergus area. Drumline and the ancient parish of Bunratty were subsumed into the parish of The Wells in the late eighteenth century, and The Wells along with Carrigerry became united with Newmarket on Fergus parish at the same time. When the parish of Shannon was formed, the townland of Tullyvarraga and part of Ballycasey were taken out of the Wells and included in Shannon.

Like all the other old graveyards, this was the site of the parish church until the reformation. The date of the building of this church is unknown but it certainly was in existence in the mid fifteenth century and was disused by 1615.  Drumline was a mensal parish which meant its revenue went directly to the bishop of the diocese. Only a small fragment of the building now remains.

The graveyard of Drumline is situated in the middle of farm land and is accessible through a farmyard and via a farm roadway. Less than half a mile away is the towerhouse of Drumline and the proximity of the church to the towerhouse is typical of the model common after the formation of the parish structure, following the coming of the Anglo Normans.

A peculiar tradition is re-enacted at every burial at Drumline. The hearse parks near the gate, and then the coffin is taken around the perimeter of the graveyard and brought in over the wall at the opposite side to the gate. A possible explanation for this practice is that in the penal times when Catholic churches were closed down by the authorities, the gate would have been locked and and the only way coffins could be brought in was over the wall.

Reuben Butler and Máire Ní Ghruagáin, The Story of Newmarket on Fergus. (Dublin,2015)

James Frost, The History and Topography of the County of Clare, ( Co Clare, reprint 1997)