You are here: HomenextPlacesnextSmithstown Towerhouse

The remains of Smithstown castle or towerhouse is situated within the Smithstown Industrial Estate and now, surrounded by modern buildings, is quite difficult to see.

This MacNamara castle, was built by Donal MacNamara and his son Seán according to R.W. Twigge, historian and chronicler of the MacNamaras. According to John O’Donovan, compiler of the Ordnance Survey Letters for Co. Clare, the builder was also Seán MacNamara, though he recorded him as the son of Síoda, son of Donough MacNamara.  The castle dates from about the middle of the sixteenth century and in 1570 it was owned by Teige, son of Seán MacNamara (probably the above Seán who is credited with building the castle). Four years later in 1574, the owner of Smithstown Castle is recorded as Seán O’Mulconry probably by way of lease from the MacNamaras. 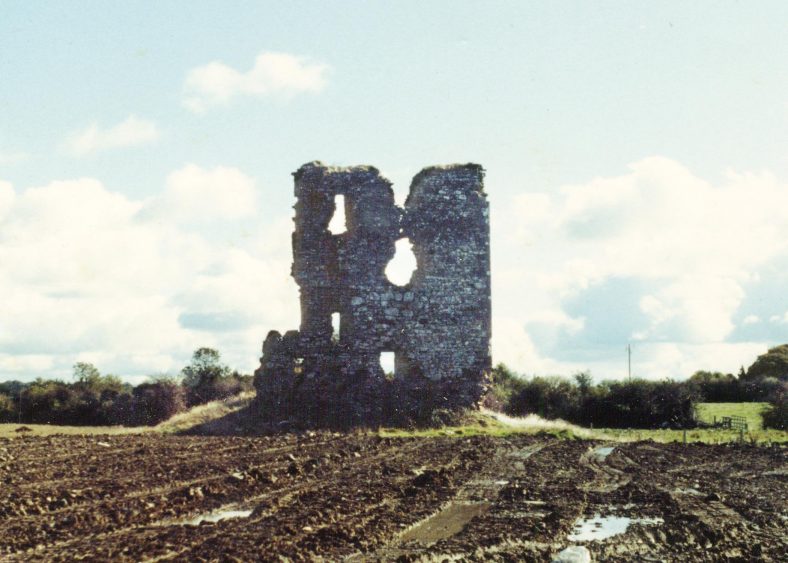 Some characters associated with Smithstown.

In 1586 a pardon was issued by Queen Elizabeth I to several Irishmen in Co. Clare who were in rebellion. One Murtagh O’Tyn of Smithstown appears on this deed, which deals with many areas in South Clare including Dromoland and Bunratty. In 1602 a similar pardon was issued by the Queen to one Teige Roe, son of Conor MacNamara of Smithstown. Clearly the native Irish were causing many headaches for the English government. In 1622 Donough O’Brien, 4th Earl of Thomond had much of the land in the county made over to him by letters patent from King James I. We find that Conor, son of the above-named Teige MacNamara of Smithstown Castle, claimed lands at Ballycasey and Caherfirogue from the Earl. After the 1641 rebellion many of the native landowners lost their castles and lands to the new English settlers. Smithstown castle was no exception. Its owners at the time were Conor Óg MacNamara, and Teige and John, sons of Covea MacNamara. It was disposed of to Sir Henry Ingoldsby, the recipient of much of the forfeited Irish property. Many of these properties were let by the new English and the dispossessed Irish caused much havoc and disturbance to the new tenants. John Hinchy of Rossmanagher was employed by George Colpoys of Ballycar Castle as a fieldworker. He claimed that he was assaulted, deprived of the dagger and made prisoner by Mahone MacNamara of Smithstown while working in the fields at Ballycar. During the siege of Ballyalla Castle in 1641 we also find named in the list of attackers, Conor, son of Teige Roe MacNamara of Smithstown. This siege lasted for many months and atrocities were carried out on both sides. Ballyalla castle was the place to which many of the English settlers fled in fear of their lives from the disposed Irish. They were eventually starved out in September of 1642.

Oliver Cromwell arrived in Ireland in 1653 and his campaign to subdue the country is well documented. He used many of the strong castles and towerhouses as garrisons for his Puritan Troops. Smithstown was recorded as being used by a garrison at this time. Those castles which he did not require were dismantled by his commissioners in 1654 to prevent them being used by the Irish. It is likely that Smithstown shared the same fate when the Cromwellian campaign came to an end in 1658, and the only other record pertaining to the castle about this time was that it was owned by Maurice O’Halloran, gent., in 1659.

The usual method of rendering the castles defenseless by the Cromwellians was to dismantle the stone staircase and to topple the battlements. Many of the castles were still inhabitable, but were not seen as defensible structures. Samuel Lewis records that the castle was standing in 1837 but gives no particulars, and James Frost states that it was in good condition in 1893. Today only one wall of Smithstown castle stands enclosed by a fence and some walls of the surrounding industrial units at Smithstown Industrial Estate.